For millions of basketball fans in the 1970s, Walt “Clyde” Frazier defined the word cool. An iconic piece of basketball history and sports journalism, this meticulously documented account tells the story of one of the greatest point guards in NBA history and how he led the Knicks to their only two championships with a style and flair that was wholly his own. Now, three decades later, Rockin’ Steady is back with an all-new introduction, afterword, and everything that made it one of the most unusual sports books of all time. 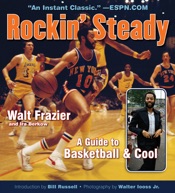