A provocative account of the 78th Fraser’s Highlanders and its crucial place in history.

The remarkable story of the men of the 78th Fraser’s Highlanders moves from the 1745 Jacobite Rebellion in Scotland, through the Seven Years’ War and the American Revolution, to the War of 1812.

Simon Fraser, chief of the Clan Fraser of Lovat, raised the 78th Highlanders, a regiment that played a major role in defeating the French on the Plains of Abraham. Driv’n by Fortune tackles the myths embedded in nationalistic history and in fictional accounts of these Highland soldier-settlers who brought the Scottish Enlightenment to North America.

The impact of the 78th Fraser’s Highlanders, which extended far beyond Scotland and the Canada of their times, is finally being told. 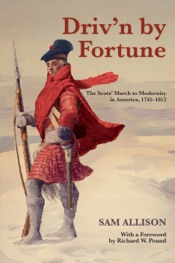