Unrestricted Warfare is the People’s Liberation Army manual for asymmetric warfare and the waging of war, strategically and tactically, using weapons not limited to bullets, bombs, missiles, and artillery shells. The two PLA officers who advocated the strategy set forth in the following pages argue that modern warfare, in ways not too dissimilar from Sun Tzu’s Art of War, is about impeding the enemy’s ability to wage war and to defend itself against a barrage of attacks against its economy, its civil institutions, its governmental structures, and its actual belief system. 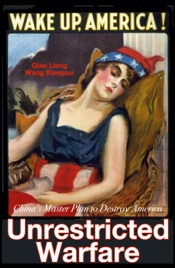