In this Mr. Men mash-up perfect for St. Patrick's Day, Mr. Mischief gets a taste of his own medicine! 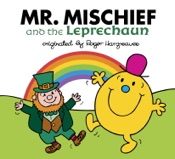